This video is just guessing at the age being 1930s.  There is circumstantial evidence that models of these specifications, and with only a few slight variations, were sold at a famous Paris toy store.
Remember this toy 9-hole bagatelle table I picked up?  That one at least had the Hamleys plaque on it, and I was able to find it in a picture from an old catalogue.
For this new one, it seems the toy store that commissioned them had their labels in paper, which is very bad at surviving.  So we have an inference that this might have been sold at that Parisian toy store, as other copies were.  Based on the build and available information about the store, I'd only be confident in giving an estimate of 1900-1920s.

I guess I buried the lede there.  I was able to purchase this table from the restorer, and it has safely arrived from France. 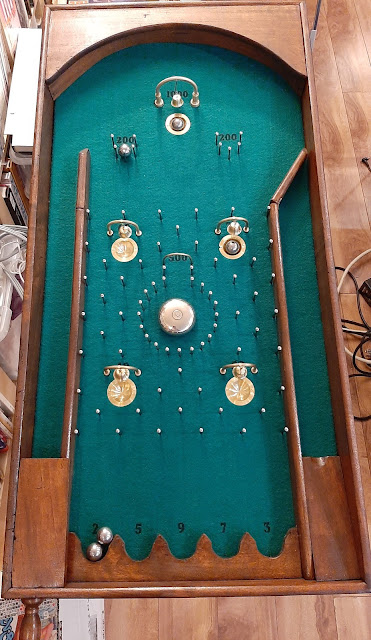 The game arrived with ~19.9mm steel balls, approx 25/32".  This would require a very full plunge to get some action from the spring plunger.  Steel balls would also not be good to launch with a cue from the right lane.

I tried 7/8" balls, which are 22.23mm, but those were too large.  If one ball was in a brass cup, another could be caught between the ball and the gate post.  I tried plastic balls and marbles, and using light balls made the plunge much better.

On the topic of "restoration"

Restorations are often a contentious topic within collector circles.  Original everything is always the most desired, and complete restorations are sometimes seen as gauche.  "It's only original once."

When it comes to the collector angle, especially for ARCADE collectors, you want the thing to work first and foremost.  Most of us game collectors don't collect things just to have them to sit inert on a shelf and take room.   We want them to work.  Even if we don't play with them regularly, the thought of a machine that isn't fully operational scratches at the back of your mind.    A broken game can haunt you until you decide to spend the time on it, or sell it in frustration to make the haunting end.

There is a small market for high-end pinball restorations.  The people who can achieve that quality are few and far between, and generally the results have to be "like new or better" for the recipient for a restoration to enter that stratosphere.  These machines have lost all of the pockmarks of history when done.

This machine would fall under that category, where the restoration is absolutely beautiful, but it is no longer an early 1900s toy, it's now a full modern restoration of one.  And that's a huge conceptual difference.

The pockmarks of history that defined this game's journey over the last 100 years have been sanded down and refinished.  And personally I am totally fine with that in this specific scenario, for a handful of reasons.

My friend James Masters (of TradGames.org.uk) found he had 2 of these models in his storage:

These were all fancy toys, smaller mockups of the grand French Bagatelle Tables whose craftsmanship could rival the best in billiards.

Another restoration of note:

Here is a similarly styled restoration video for a slot machine.  This video can get the hairs of slot collectors standing on end with the way some of the materials are treated.  A collector would very much try and leave it as-is, and there are even some steps that a "slot machine restorer" would probably do very differently here.  I still think it's an interesting breakdown of the machine's parts and a relaxing watch.